10月26日学术讲座：Modelling Interactions and Transport Processes within the Cell Envelope

This seminar will provide an overview of the general approaches to membrane protein simulations, with especial focus on methods for modelling and measuring protein-lipid interactions within biological membranes. In the second half, the seminar will discuss membrane protein components that are critical for bacterial cell envelope maturation. For each study I will discuss our recent studies applying structural bioinformatics, multiscale molecular dynamics simulations and computational chemistry to elucidate the dynamic interplay between the membrane proteins and their substrates, products and known inhibitors.

Phill Stansfeld is an Associate Professor (Reader) of Computational Biochemistry in the School of Life Sciences and Department of Chemistry at the University of Warwick. Phill received his First Class Bsc (with Hons) degree from the University of Edinburgh in 2003; studying glutamate receptors for his undergraduate research project, in the lab of Professor David Wyllie. Phill continued his interest in ion channels for his PhD, at the University of Leicester, researching the hERG potassium channel and its relatives, with Professor Mike Sutcliffe and Dr John Mitcheson. His studentship was funded by the BBSRC and Novartis Pharmaceuticals. He completed his PhD in Biochemistry in 2007. Phill then joined the Structural Bioinformatics and Computational Biochemistry Unit, in the Department of Biochemistry, University of Oxford, where he worked with Professor Mark Sansom as a Wellcome-funded Post Doctoral Research Associate. At Oxford he initially continued his interests in ion channels, before branching out to consider a wide range of membrane protein structures. In 2011, Phill was awarded a BBSRC Researcher Co-Investigator award to establish a database for all membrane protein structures, called MemProtMD. In 2015, he became an independent Research Fellow within the Department of Biochemistry, and subsequently received funding from the BBSRC, MRC and Wellcome. While at Oxford, Phill held a Research Fellowship at Wolfson College between 2009 and 2016, and was a Stipendiary Lecturer at St Catherine’s College between 2012 and 2019; twice covering sabbaticals by the Biochemistry Tutor, Professor Penny Handford. In 2019, Phill moved to the University of Warwick, taking up an Associate Professorship at Reader level, held jointly between the School of Life Sciences and Department of Chemistry. 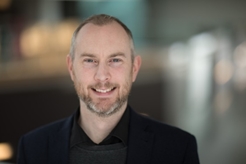