Bacteria usually live in densely packed communities called biofilms, where the interactions between the bacteria give rise to complex properties. Quantitative analysis is very useful in understanding these properties. However, current biofilm culturing approaches impose various limitations. We developed a microfluidic approach for quantitative study of biofilms, which is universal and can be used to study biofilms of various bacterial species. To demonstrate the utility of this approach, we will present two examples, both of which revealed new biological insights. In the first example, we will explore the response ofEscherichia coli biofilms to exogenous hydrogen peroxide. We found biofilms gained tolerance to H2O2, but their growth was slowed down due to the metabolic cost of maintaining the tolerance; However, under oxygen limitation, H2O2 can anti-intuitively boost growth. In the second example, we will explore the spatial aspect of Pseudomonas aeruginosa biofilms. We observed an auto-fluorescent substance within the biofilm and identified it as the iron chelator pyoverdine; We further showed that the extracellular matrix in the biofilm acted as a diffusion barrier for pyoverdine, minimizing its loss into the environment and therefore potentially promoting the sharing of pyoverdine within the biofilm as a public good. 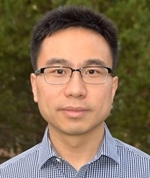